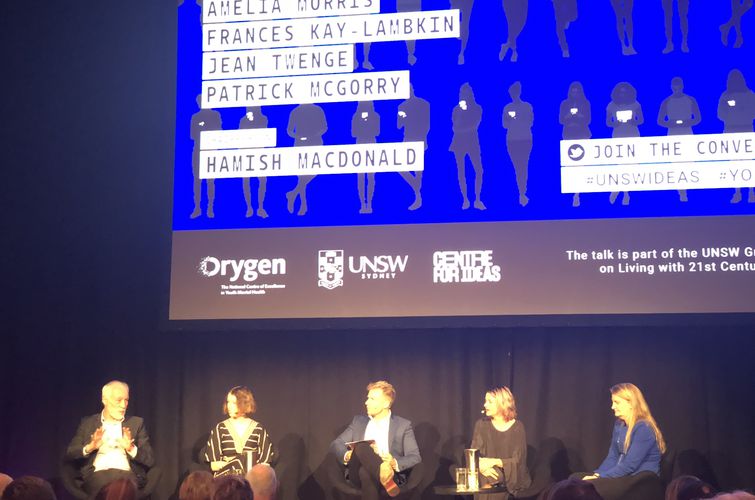 Professor Jean Twenge presented over 20 years of studies on 12-24 year olds, being over 11 million people, and determines the sudden increase in youth depression and health issues relate to an anomaly from 2011.

Last Thursday at the Opera House I saw Jean Twenge, Professor of Psychology at San Diego State University and author of iGen, along with a panel of youth and mental health experts: Amelia Morris, Associate Professor Frances Kay-Lambkin and Professor Patrick McGorry discuss Professor Twenge’s assertion that since the introduction of the iPhone, around 2011, youth mental and emotional health has suffered dramatically.

Professor Twenge presented evidence of youth suicide rates of 12 to 14 year olds doubling since 2007 in the US.

Other interesting statistics with 12-24 year olds:

Going out without parents:

Getting together with friends almost daily:

Feel left out and lonely:

Sleep over 7 hours a night:

Professor Twenge and the panel were in general consensus that adults have largely managed to incorporate iPhones as a tool to enhance their lives, whereas children seem to have replaced living life with observing it through their devices.

Professor McGorry said “I hear young people say all the time that they feel left out and lonely. They can monitor in real-time what their network is doing and if they haven’t been invited to a gathering their negative emotions are compounded.”

Everyone agreed that technology was not going to go away, but children do not have the maturity or understanding to moderate their use. Parents (and society) need to teach these skills by restricting non-productive screen time and encouraging sleep and exercise, or young people slip into unhealthy habits that have very serious mental and physical health repercussions.

Amelia Morris spoke about how social media and personal devices were vital when she was struggling and growing up in an isolated area.

“Being able to stay in contact with my friends and family was literally a life-line for me. I don’t think I would have coped without the technology.”

Professor Twenge was quick to say that the ‘no technology’ statistics were just as bad as the statistics on too much technology use, so her advice was definitely the need for teaching young people how to moderate their use, rather than ban kids from tech altogether.

Just as we teach kids to eat their vegetables and put on their seatbelts in a car and play nicely with others, parents and educators need to teach good technology use.

Schools are becoming better with teaching ‘cyber safety’ and ‘coding skills’, but good technology use also involves teaching the difference between ‘technology as a tool’ and technology as ‘passive entertainment’.

When I was researching for my final Bachelor of Communications research project, I discovered that the elderly felt all the same emotions of loneliness and isolation that youth do. They no longer feel included or valuable to their communities and in fact feel like a burden on their families.

In 2017 the Woollahra library hosted 20 Cranbrook senior students to sit with local elders and have an informal chat. The results were astonishingly positive. The elders remarked how surprised they were by the maturity & interest the students showed. And the students said they loved the stories from yester-year. Both groups wanted the program to continue.

Bookform’s The Family Book Project is a solution to automate intergenerational interaction, to engage both young and older people in a fun, educational and empathy building activity. It’s using technology as a tool to enhance people’s lives and to make both young and old feel heard and valuable.

Maybe young people will hear stories about survival and struggle and learn resilience. Maybe older people will see young people as having a very different life to theirs, rather than being mad at youthful ingratitude.

The Bookform technology can start new family and community dialogues and create a printable digital book, so everyone can enjoy the stories, now and for generations to come.