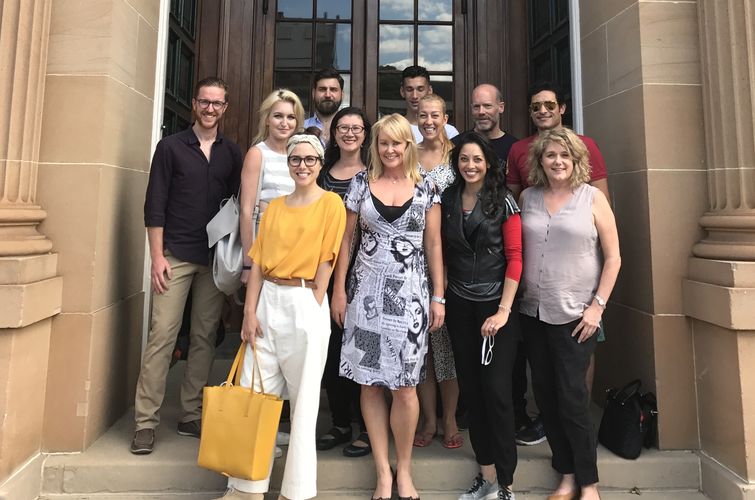 How Europeans used time-travel to conquer the world – and will Australia pioneer the next leap forward?

Toyota Prius sponsored the latest TEDxSydney Adventure, from the Watches of Switzerland store on George Street, Sydney to the Nano Particle Hub at Sydney University.

12 intrepid travellers tried to wrap their heads around how mechanical computing facilitated time travel 300 years ago, through electrical computing to help get us to lunch, and ending at quantum computing; the next frontier.

A mixed group of strangers met at the Four Season hotel lobby yesterday and were corralled by the efficient TEDxSydney team to the adjacent Watches of Switzerland store. David Bryden, the Watches of Switzerland’s Marketing Manager proceeded to explain the true mathematical genius and craftsmanship of the humble time-keeping device and how it really did change the dynamics of the world.

Accurate time keeping was vital in nautical navigation around the earth. Whoever could craft the most reliable clock, could accurately pinpoint their position on the planet and therefore safely travel and map the world, staking claim and pilfering treasures as they went – something had to finance world domination.

The mechanical components of these first reliable clocks were the beginnings of computing. Each mechanical part, from a tiny cog, to the screws, wheels and springs, all worked in pre-programed mathematical harmony to calculate earth’s rotations, gravity’s influence, and every fluctuation from celestial wobbles, to reliably gauge the passage of time.

The mathematical geniuses who mastered the theory and the craftsmen and tools required to bring the theory to practical reality helped Europeans become the dominators of the world.

The next stage of computing is the one we are currently using, electrical computing. Instead of physical mechanical parts moving according to the laws of mechanical physics, we now rely on electrical signals converted into 1s and 0s that follow the rules pre-determined by software programs to achieve a desired outcome, such as a calculation, or graphic, or words appearing on a page.

Satellites at fixed positions in space sending constant signals and receivers on earth are used to calculate where we are on the planet now, so that’s how we made our way to lunch, using the GPS navigation tool on our smart phone or Sat-nav.

Electrical computing dominates the world now and our demand for more and more electrical energy fuels fierce debate on how to supply this great need, especially as more people on the planet want to become a member of this ‘modern-world’.

After lunch we were welcomed by Professor Michael Biercuk to his specialised – only one in the world – nano science lab.

After being briefed on the safety protocols of elbows in, eyes forward and NO TOUCHING anything or we could all be vapourised, we were led through the highly bespoke halls of glass-reinforced concrete and stand-alone bed-rock fixed flooring, into his lab.

The lab is a Faraday cage, with cloth-covered air-conditioning venting that can replace all the air in the room within a minute, ensuring there is no more than a 0.1 degree change in temperature at any time. The walls are all equipped with wiring to counter-act any vibrations from passing traffic or noisy students. All this is to create an interference-free zone where Prof Michael and his team of geniuses, from Australia and around the world, can trap individual ions (atoms with 1 or more electron taken away) and play around with them.

The reason they want to have a good look at these evasive, fragile atom’s behaviour is because all the rules of classical physics, as we have become familiar with over the last few hundred years, seems to go out the window at the quantum level. And if we can figure out quantum mechanics we can hopefully create a quantum computer and whoever creates this technology first would, theoretically, have great power.

A quantum computer is believed to be able to make billions of calculations at a time, rather than in a linear fashion as computers do at the moment. This level of computing capability would be useful in crunching massive amounts of data into useful purposes or encryption or simulations.

Truth be told, no one really knows yet what could be achieved with quantum computing – maybe real time travel!

How, What, Why of Learning

Learning Under Lockdown with FamilyBookform